Fostering community, advocacy, and professional development that empowers you and your team to deliver value through analytics.

Unlocking your potential through analytics. 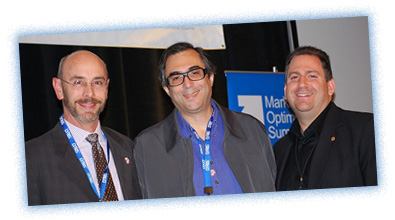 One might peg the start of the web analytics industry to the founding of WebTrends in Portland, Oregon in 1993, even if they didn't start selling software until 1995. MIT Graduates established NetGenesis in 1994 and Accrue, Omniture, and WebSideStory got off the ground in 1996. These companies spent their formative years creating software that could withstand the rigors of commercial use and explaining the value of web analytics to potential customers.

Vendors had created viable tools, but there was still a lot of room for better education, better networking, and occupational support. The idea of a web analytics professional association had been bandied about to support the dissemination of wisdom and generally promote the cause. It wasn't until ten years after the "start" of the industry that persuasion architect Bryan Eisenberg, Hudson Digital Partner Andrew Edwards, and web strategy consultant Jim Sterne decided to breathe life into it.

The abundant enthusiasm for an independent web analytics organization was readily apparent after only one evening in the lobby bar at the 2003 Emetrics Summit in Santa Barbara... Hundreds of phone calls and thousands of emails later, our three founders made the idea legal and convinced Seth Romanow from HP, search marketer Andrea Hadley, and web analytics executives Rand Schulman (WebSideStory) and Greg Drew (WebTrends) to join the inaugural board.

Right off the bat, the board saw the need for committees to tackle:

With but a mere mention to Bryan Eisenberg's "GrokDotCom" newsletter and his ClickZ readers, and to Jim Sterne's "Sterne Measures" subscribers, the volunteers turned up in droves to help the newborn Web Analytics Association get on its feet.

The first Board of Directors' meeting was held in Portland, Oregon in the Summer of 2004 preceded by another gathering in another lobby bar...

The WAA officially became the DAA in March 2012. As more digital data streams became available, the responsibilities of the analyst broadened and the term "web analytics" became known as the study of data collected exclusively on websites. The Board of Directors chose to change the name to the Digital Analytics Association in 2011 to account for the analyst's changing role of weaving together data from multiple sources and channels.

View the bylaws of DAA.

For DAA to effectively represent you and our industry we invite your participation. The DAA is actively seeking passionate and capable professionals to join the DAA and serve as committee members. Get involved at the ground level and offer your skills to help.

If you desire your voice be heard in the industry, become a DAA member.